Bodrogszerdahely’s name is rather well-known in Bronze Age literature, since this is where the eponymous site of the Füzesabony culture’s late koszider period, a bi-ritual cemetery, came to light (Polla 1960). However it is a lesser known fact that multiple sites from that same timeframe also exist at the edge of the settlement. We made an effort to localize these sites and clear up the confusion regarding their names on December 29, 2017. Naturally the field survey was preceded by plenty of research, the results of which you can read about here.

The late Füzesabony cemetery was added to literature under the name Bodrogszerdahely-Bakhegy and its exact location was unknown up until now. Should we read the Slovakian lines of Polla’s first publications (Polla 1956, 1958), it becomes apparent that the cemetery is located westwards from the Bálvány hegy, also known as Bak hegy by the locals, in parcel 478 and the gardens of houses 49, 50 and 51. The latter data can first be found in an article discussing Copper Age graves that were found in the area (Polla 1956, 640) and after that of course in the main publication of the cemetery in 1960. 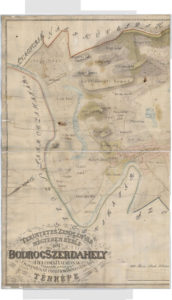 These lots can be identified precisely on the 1859 map showing the edge of Bodrogszerdahely, which can be found on the Hungaricana website under number TK 1339 (https://maps.hungaricana.hu/hu/OSZKTerkeptar/1335/?list=eyJxdWVyeSI6ICJCb2Ryb2dzemVyZGFoZWx5In0).

Polla writes that the settlement to which the cemetery belongs is located 1500 metres to the north, named Kompošt (Polla 1958, 511), and refers to the 1954 article of Soudský and Břeň. When describing the site north of the village, the area is named Kompoš, but it is mentioned that the site is referred to by Š. Janšák as Zombok (Janšák 1935). During the construction of the railroad they surveyed a multi-layered site on the river Bodrog’ backwater bank with three small probes. Beneath the medieval layer was one from the Iron Age, then a thick layer from the Otomani culture came to light during the excavation, under which a layer from the Neolithic was found. Based on the publication, this second last is in fact a settlement layer than can be classified as late phase Füzesabony culture. 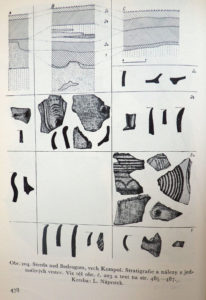 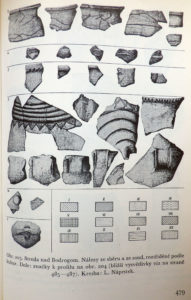 On the aforementioned map, the border section named Zompod is a north-south facing hillside located east of the settlement close to the edge of Somotor/Szomotor; it has a significant end that connects to the river Bodrog, furthermore it is cut by railroad. This hill however neither fits the orientation nor the distance mentioned in descriptions.

Its mystery is partially solved on page 157 of Andel’s 1955 article, where three sites are mentioned at the edge of Bodrogszerdahely. Here Andel calls the Kompoš site Malomhomok. This area can be well identified based on the aforementioned and multiple other 20th century maps. The layout published by Soudský and Břeň also fits the Malomhomok area. Therefore the location of the Bálványhegy cemetery’s settlement (based on Polla) can be determined and it should be called Malomhomok to avoid confusion.

In addition, Andel mentions Zompod as a separate site as well as another one named Šibeničny kopec, meaning ‘gallows’. On the 1859 map, there is an area south of Zompod called Akasztó homok. This can be resolved by the fact that in 1935, Janšák refers to the Bak and Bálvány hegy as Akasztó domb on a map.

All in all, Andel’s three sites are:

Incidentally on page 484, the area of Zompot, located at the edge of Szomotor, is mentioned by Soudský a Břeň as a Hallstatt period settlement.

The situation is further complicated by the fact that literature also knows of an Otomani settlement named Bakhegy. However during the excavation of Slavic barrows, Budinský-Krička found that they were from a Bronze Age settlement layer and likened its material to that of the Nagyrév culture. On the other hand the publication table shows characteristics of early Otomani culture (Budinský-Krička 1959).

Nándor Fettich and Gyula László excavated Hungarian Conquest age graves on Bak hegy. Unfortunately the documentation of it has been lost, but based on a catalogue of Hungarian Conquest era finds, Tibor Báder placed the excavation’s location on the Bálvány hegy (Báder 1998). Once again, Bronze Age artefacts came to light during the excavation of the graves, which suggest the presence of a massive Bronze Age settlement layer. These Bronze Age finds were placed in the Hungarian National Museum and published by Tibor Kovács in 1982. This assemblage also belongs to the culture’s early phase. This means that near the late cemetery, presumably on the Bálvány hegy where the Slavic and Hungarian Conquest era graves were excavated, an early settlement can also be found, its exact location unknown.

Based on this prior information we attempted to find and identify the site on December 29, 2017.

The end of the Zompod/Zompot hill is crossed by both road and railroad. We collected a vast amount of archaeological finds, mostly undecorated ceramics, on the hill next to the railroad guardhouse. The hill is partially covered with dense shrubs and a pit in the middle that hints at mining; a vertical embankment to the south shows that part of it has been levelled and mined. The southern areas keep increasing in height and we found traces hinting at trenches here. The area is definitely an archaeological site, its age later to be determined. 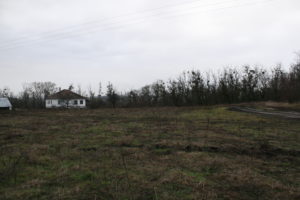 The area of Malomhomok is well identifiable, even the crucifix depicted on the 1954 map is still present by the roadside. The hillside closer to the river Bodrog is bushy and very rocky while its southern side has a vineyard on it. But the western and southern parts of former hill that were cut off by road are fields, from which we collected a large amount of finds (such as pieces of a portable heard) along with many obsidian raw materials. 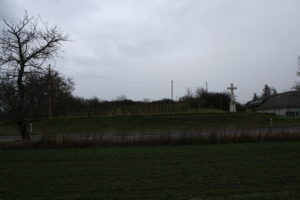 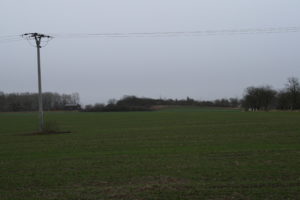 The area of the Bálvány hegy cemetery has been built in with houses; its location can only be marked on map.

Climbing to the top of the Bálvány hegy though, we find a circular flat plateau with a diameter of 50 metres which is surrounded by a few metres wide terraced strip. The surface of it cannot be seen as the entirety of the area is covered in tall sedge grass. Every molehill on the plateau’s surface however was rich in archaeological finds. The formation of the mountaintop is verily similar to the shape and size of the early Hatvan culture settlement found at Hernádbüd (for more information, visit http://bronzkor.hu/hernadbud-vardomb/); the assemblage found is from the Bronze Age, but unfit for further identification. 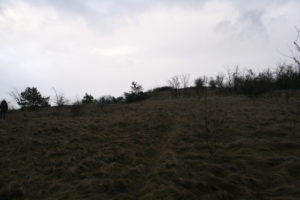 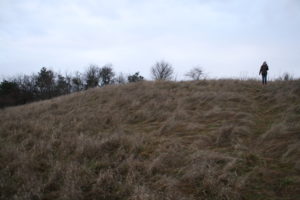 Overall we identified four sites during data comparison. The location of the cemetery published by Polla is confirmed along with the settlement named Malomhomok/Kompoš, located 1500 metres north of it. There is a plateau on the top of Bálvány hegy that is certainly a result of conscious landscaping, surrounded by an artificial terrace. Based on our current knowledge this could be the location of the early Bálvány or Bak hegy settlement. The area of Zompod/Zompot is definitely a separate site as well, although its age remains uncertain.

With that in mind it is likely that Maria Novotna may have confused two settlement sites in her 1995 brief summary.

It is possible to perform additional non-invasive surveys at certain parts of the Malomhomok and Bálvány hegy areas, which we plan doing so in the future.