Sites in the Košice Basin 2: Košice-Barca, Košice-Táborisko and all around it

The compilation of archaeological sites in Košice is one of the lower priority tasks, given that a topographic volume has already been made for the Košice–okolie District (Lamiová-Schmiedlová/Mirrošayová 1991), however it can still be full of surprises.

One of the most well-known sites in Bronze Age literature is the fortified settlement of Košice-Barca/Kassa-Bárca. Barca used to be a separate village, but by now it became a part of Košice. The name of the archaeological site: Begányi (Begahner)-Mühle/malom, or Nad Begányijo mlynom in Slovak. The entire area of the Bronze Age settlement is now completely built in with family houses. The former settlement is unrecognisable on the surface both in terms of spatial form and microreliefs. I mention this because there is a major recess in line of the former Bronze Age ditch at Szihalom, which is well noticeable even on the paved road network.

The Barca site can be found on the southern bank of the Myslavký stream. The surface of its plateau, rising 12 metres above the stream, was fortified on the western and southern sides with a ditch and walls. The northern and eastern sides were bordered by the line of the natural embankment. In 1936, J. Teplý, former owner of the area conducted excavations here. Ferenc Tompa also excavated the site in 1941, but a systematic excavation on the entirety of the area only occurred between 1951 and 1954, under the lead of F. Prošek, L. Hájek and J. Kabát (Kabát 1955; Hájek 1953; 1954; 1957; 1959; 1961). 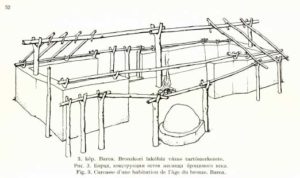 The documentation of Tompa’s excavation was destroyed but László Varga, having seen the document in 1942, wrote a short summary of its results and also created a house reconstruction (Vargha 1955). J Pástor also performed excavations here in 1949.

The area was inhabited not only in the Bronze Age. The order of the layers is the following:

Layer III.: Certain publications describe it as a levelled clay layer that serves as the foundation for the Bronze Age settlement (Bader 1998, 67), others describe it as a grey clay layer and evaluate it as part of the Otomani settlement based on its spiralled knob and textile decorated ceramics. In a recent monograph from P. Šteiner (2009) it was valued as a levelling layer.

Layer II. has to be divided to two sub-phases based on statigraphic observations. This is the first fortified phase of the settlement. The fortification is wood-dirt construction, followed by a ditch on the outside. The exterior of the fortification was covered by walls daubed with clay. The fortification was 4 metres thick at the base and 2.85 metre tall. In an earlier phase there was a pathway paved with rocks, located on the inner side of the fortification, with houses adjusting to its route. Houses in the southern and northern areas had two rooms, with single room houses between them. This rock-paved route was not in use in the more recent layer. Three room houses were built at the southern wall, in lieu of the two-room houses and four new buildings facing east-west were also constructed. After a burned house horizon the settlement was rebuilt, this is what we refer to as Layer I. The previous ditch outside of the wall was buried and wider 4.50 metre high wall was built, further heightened by a palisade. The newer, 10 metre wide ditch was dug 7 metres outwards of it. The new wall was built not only on the old ditch, but also on the foundation of the old houses and it also lacked an inner wooden construction. Layer I. was 90 cm thick and divided into 3 sublayers; it had no trace of any regularly made road network. Traces of buildings are indicated by stone construction and postholes, without any noticeable clay floor. According to Točik, two-story houses could have been present in the settlement this period. The uppermost layer was dated by its Bodrogszerdahely type ceramics, based on that it can be placed in the latest, Koszider phase of the Füzesabony culture.

Outside of the fortified area a so-called “Vorburg” or outer settlement part existed, defined by it pits.

The only ground plan in literature for a long time was the one published by J. Kabát (Kabát 1955, obr. 259). In his 1994 article, Točik separates the houses found on the Kabát ground plan by phases, creating the two sub-phases of Layer II., the description above matches this.

Based on that, the ground plan (Fig.3) published in the catalogue Między a Mykenami a Baltykiem (Gancarski 2002) also pictures things erroneously by mixing the elements of certain phases.

The 2009 work of P. Šteiner shows a detailed picture on ground plan development: 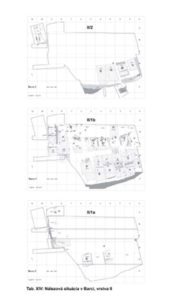 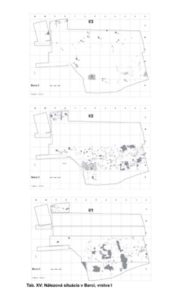 — Located 700 metres south of the Bronze Age Barca settlement, we know about additional Füzesabony culture graves within the settlement of Barca from the areas Košice-Barca – Kastiel. Topographic Vol. no.: 1/7.

— Kosice-Barca, Čkalovova ul.1. Two Bronze Age ceramic sherds came to light here while laying down the electric line. Based on oral information from D. Gašaj, this area is also a burial site. Topographic Vol. no.: 1/3.

— Remains hinting at the presence of a settlement were found at the site Kosice-Barca, Mezdi Svetlou a cestou na letisko. Vol. no.: 1/9.

The real surprise for me was the 2001 newscast of L. Kaminská reporting on a new Füzesabony culture settlement located on the plateau of the northern bank of the Myslavský stream, in the Táborisko parcel. During the emergency excavation before the construction of a Cassovia shopping centre, 41 Otomani settlement features came to light, one of which, according to the digger, being the work pit used for creating handcrafted items. The assemblage of the excavation is currently getting prepared for publication. Based on L. Kaminská’s gracious recount, the area made available for them had its humus layer removed. However at the edge of the surface, where less of the soil was cleared, L. Kaminská documented large, burnt spots of daub via photographs, which can be evaluated as remains of surface houses. This means that not only pits were present on the Táborisko plateau, but it was also a settlement with houses similar to those found at Barca in terms of age. Today the entirety of the plateau is built in with shops and parking areas. Füzesabony culture finds came to light here during the excavation of other areas as well. No signs of a ditch or other fortifications were found throughout the excavation. However based on the typology of the finds, there had to be a period where both settlements were standing. The Táborisko plateau is higher than the one in Barca, the two sites are clearly visible from each other. According to L. Kaminská, there is a spring at the Táborisko plateau that still flows today and it is led to the valley underground. Therefore this plateau was just as ideal of a place to settle as the one facing it, and perhaps even offering more comfort due to its southern exposure. This image of double settlements is brand new in relation to what we had known previously, I cannot recall other examples from elsewhere yet. Since both areas are completely covered, we do not have the opportunity to conduct further research and answer any questions that may arise.

Therefore we cannot clearly evaluate the two settlements as cluster types (Duffy 2014, 203-206). We do not know whether the groups living in them were a single community or defined themselves as separate groups. If the latter was the case, was there any kind of dominant or subordinate relation between them?

We marked the locations of the Cassovia shopping centre and the fortified settlement of Barca on the print below. Their altitude relations are clearly visible. A recess can be seen in front of the shopping centre on a relief, at the edge of the embankment. It seems obvious to consider this as a Bronze Age ditch, the other side of which the excavation led by L. Kaminská was performed, meaning that the pit area and the inner, ditch-surrounded area were both destroyed by then. This however, is only an educated guess without any evidence to support it, and it is unlikely that it will ever receive any.

We know of two additional Füzesabony culture sites in the vicinity of the two settlements’ area.

— In 1976 at Kosice, Napájadlo, finds from the Koszider phase of the Füzesabony culture came to light from the layer of a profile (Čaplovič-Gašaj-Olexa 1978, 63-64).

All known sites from the inner city of Košice have been built in by now, which regrettably makes the clarification of their relations to each other impossible.

Their topographic relations however define a small circle which was intensively inhabited during the Bronze Age. Due to this, in the case of sites from the same age – something that I currently cannot precisely evaluate – we can assign a relatively tight living space for the Bronze Age with one or perhaps more independent communities. Given the small area, I prefer to view their data as multifunctional living spaces for the same cohesive community, but this is an admittedly subjective take on my part.