Sites in the Košice Basin 1: Valaliky-Vsechsvätych/Kassamindszent 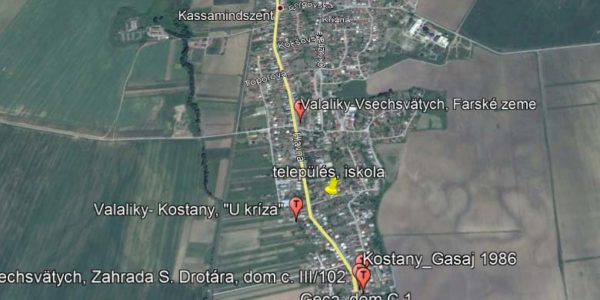 If there is something that can get confused, it is the order of Bronze Age sites found at the settlement Valaliky/Kassamindszent, southeast of Košice, and at the (now integrated) settlements Geča/Hernádgecse and Čaňa/Hernádcsány further down south of it (current, Slovak name first, followed by Hungarian after the slash). The material culture (or archaeological culture, in the classic sense) known in Hungarian literature as Füzesabony culture is referred to as Otomani culture in Slovak literature. In the post I shall be using dual terminology.

There are multiple reasons behind this confusion:

– This complex settlement also integrated Geča/Hernádgecse to the south of it, as well as another southern settlement, Čaňa/Hernádcsány. Although there are signs to differentiate them, it is an entirely contiguous populated area.

– Pástor marks the sites located at Buzice/Búzafalva (northern part of Valaliky/Kassamindszent today) and at the edges of Valaliky-Geča/Kassamindszent-Hernádgecse, however those were only published by Darius Gašaj in 1986, rendering the search for complete data in Pástor’s essays with map annexes futile.

– The larger cemetery located at the borders of Valaliky/Kassamindszent and Geča/Hernádgecse, mentioned as point 4 in the table below, has a total of 5 different citations in literature, and only by comparing the Slovak texts can one find out that they are all referring to the same site. 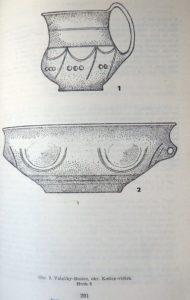 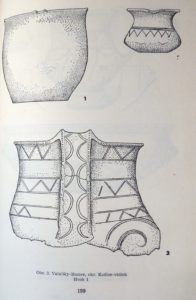 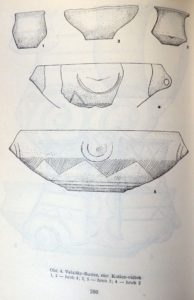 4, Based on Gašaj’s 1986 description, the graves published in the essay (4a and 4c) can be found on the lots of two family houses at the edge of Valaliky/Kassamindszent and Geča/Hernádgecse, near the Kassa-Hernádcsány road. The graves excavated here are part of a larger cemetery. The first graves were rescued by J. Pástor in 1957 (4a). It was also J. Pástor who excavated additional graves on the parcel of S. Drotára between 1963 and 1968 (4b), however we lack further information on them. The 1979 grave (4c) was found in the garden of a house, its assemblage was handed over by B. Kudrnáčová to the East Slovak Museum. In 1977, Budinský-Krička sourced a beaker from another grave in the area of Geča/Hernádgecse (4d). Gašaj J. mentions the house of J. Sajka (number IV-74) where finds came to light during its construction (4e). The topography volume of Košice only cites the Budinský-Krička site, despite the fact that it was published 5 years after Gašaj’s publication. By comparing the data it is undecided whether areas 4d and 4e are identical or in fact represent two separate lots. Perhaps it is irrelevant, given the possibility that a far greater cemetery is getting disturbed constantly with these construction works. The identification of the lots could be important when it comes to estimating the size of the cemetery. Gašaj also mentioned this when he wrote that, based on the data, the cemetery may stretch even to the middle of Geča/Hernádgecse.

The material of the two graves publicated by Gašaj: 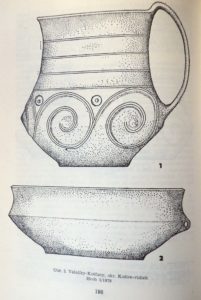 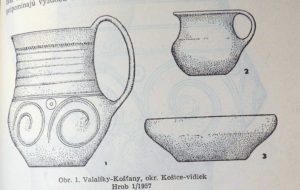 Mug from the publication of Budinský-Krička:

5, A ceramic hinting at a Füzesabony/Otomani culture settlement came to light on the local schoolyard. After a brief report, the site is in the same parcel as one of the Valaliky/Kassamindszenti cemeteries (either 2 or 3), but it is from a much later period. 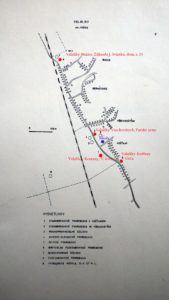 Therefore J. Pástor published early Bronze Age burials, whereas the Otomani graves were summarized by D. Gašaj. The schoolyard, published as the settlement pit, is situated roughly halfway between the two Otomani/Füzesabony burials.

The next step should be site identification, and the collection of hopefully more precise settlement data.

Was that all clear?