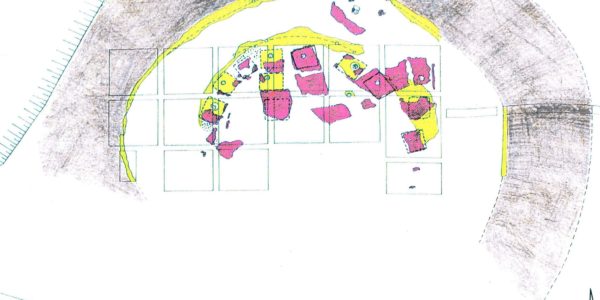 Apart from the fortified settlements of Košice-Barca/Kassa-Bárca, Nad Begányijo mlynom and Nižná Myšľa/Alsómislye, Várhegy there is another lesser-known settlement in the Košice Basin with a similar structure: Rozhanovce/Rozgony, poloha Plebanské II. The settlement lies on a terrace at the meeting of the Torysa/Tarca and Olšianský streams. The site was excavated between 1978 and 1983. Based on published data I found that the area of the Bronze Age settlement has not been fully excavated yet, therefore making it ideal for non-destructive research and comparison with the previously excavated area. However I was left sorely disappointed. Today, a plant nursery is situated over the location of the Bronze Age settlement, which meant that it was fully transformed, with no sign of the ditch or any other observable microtopographic features hinting at the former surface. The central part of the Bronze Age settlement has been completely destroyed. 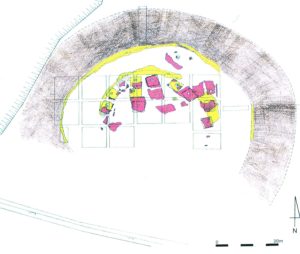 So far there have been two publications discussing the settlement’s inner structure (Gašaj 1983; 2002). Based on those we know that the Bronze Age settlement was protected from two sides by a ditch and rampart. The ditch was 15-16 metres wide and 4 metres deep. The rampart was 8 metres wide at the base; its outer and inner sides were reinforced by palisade walls. The diameter of the thusly made protected area was 40 metres. Two main settlement horizons were observed here, similar to Košice-Barca I and Nižá Mišľa. We only know of a few houses from the earlier horizon, the rampart was not present at that time. After the houses of this period were destroyed by fire, the ramparts were partially built atop them and the houses of the younger period were constructed, of which 11 were excavated. In this period the houses were organized into streets, following the line of the fortification. The houses of both settlement periods were single-room (with 4×4.5 metres of floor space), daub-walled, plastered floored buildings with a fireplace.

The Rozhanovce settlement can be dated into the classical phase of OFK, the younger layer being as old as layer I/3, while the older layer partially matching layer II of the Barca settlement. 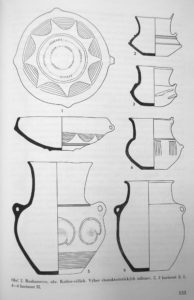 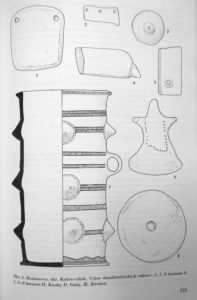 The settlement was first described by Budinský-Krička (Budinský-Krička 1976; 1977) and it was also mentioned later by Jurecko (Jurecko 1980), however both refer to it as Rozhanovce-Hôrka. This means that the two place names refer to the same settlement. In these early reports Bükk culture, Neolithic painted pottery, Copper/Bronze Age transitional and Post-Bronze Age uses are all mentioned when describing the area; OFK dating was not obvious at that time.

However the descriptions also mention Bronze Age finds located on both banks of the Olšianský stream. This area is called Pod silaše, situated at the edge of Košické Oľšany/Kassaolcsvár. In 1995, Novotná stated that it was the Olšianský stream that likely separated the fortified part of settlement from its unfortified portion. Another settlement is mentioned in the nearby swampy area. We also know from Novotná that approximately a quarter of the fortified area had been excavated. During our fall survey the area at Košické Oľšany was covered in waist high weeds. After a clean-up the area may be suitable for geophysical survey.

Barca and Rozhanovce are 8 kilometres apart each other; the distance between Barca and Nižná Myšľa is 10 kilometres, and 12 kilometres in the case of Rozhanovce and Nižná Myšľa. Counting with an average 4 km/h walking speed, if Bronze Age people set out in the morning, they could visit their neighbours by lunchtime. Not to mention the possibility of sailing down the Torysa/Tarca.

Signs of craftsmanship are known from all three settlements, and based on their fortifications we can evaluate them as central settlements. Their inner structures, the size of their houses and their assemblages are identical and they existed in the same horizon chronologically, meaning they were likely settlements of equal rank within the Košice Basin microregion.

We can observe the duality at the Rozhanovce—Košické Oľšany settlement group that I highlighted as a key point at the beginning of the research: is there a so-called outer settlement of these “fortified” settlements, and if so, what is the relation between them? So far we did not find a site from which any new observations could be added to the answers for this question.

But let’s not get impatient!